At KinderPrep, Kids get Ready for Kindergarten

The summer school students plopped down on an orange mat and listened as teacher Elizabeth read aloud to them from a book. As she pointed out different animals, they took turns pinning the lion and polar bear pictures on a cork board.

They had already gone through parts of a book  — front cover, back cover, spine — as they sat outside on the grass in Santa Monica. People walked by with their dogs. One floated past on a hoverboard.

The children, ranging in age from 3½ to 5, were engaged in more serious pursuits. They were at KinderPrep, a weeklong boot camp designed to prepare them for the rigors of kindergarten.

Parents and at least one au pair had dropped the dozen children off at the Colorado Center, an airy office complex with its own park and private security. Among its tenants are Hulu, HBO and KinderPrep’s home, Academic Achievers, a private tutoring and admissions counseling company.

It’s now common for Westside parents to enroll their kids in these early tutoring programs. Some of the children in the group also had been signed up for separate one-on-one sessions that cost $120 to $200 an hour.

Such efforts can really help students, said Elizabeth, the director of KinderPrep and other early education programs at Academic Achievers.

“When they get into kindergarten,” she said, “there is no play. It’s like first grade.”

Parents vie for coveted kindergarten spots at elite private schools that charge upwards of $25,000 a year.

“It’s so competitive,” said Jenni Silberstein, as she watched her 5-year-old, Lily Joyner, settle into her writing exercise, mouth in a straight line, ready for the serious task ahead. “It’s more the private-school parents who do it,” Silberstein, a psychotherapist, said of the camp.

Lily will start kindergarten at Kenter Canyon Elementary, an L.A. Unified public school in Brentwood, but both of her older siblings attend private school — and Silberstein said Lily’s constantly asking to be taught how to read.

The camp day had started in the complex’s grassy park area, where the children opened their personal folders. Each contained family or personal photos, which parents had been asked to provide. Elizabeth had pasted each child’s photos in a notebook alongside space for the child to write.

For those who didn’t know how to write yet, the three instructors helped, using yellow highlighter to spell out what the campers wanted to say, and then showing them how to go over the letters’ lines in darker ink.

Then came circle time. The children left their bright green writing tables for the mat, where they sat surrounded by stuffed animals. Elizabeth led them through the months of the year, and when this prompted them to start shouting out their birthdays, she clapped rhythmically to get their attention. It worked. They quieted down. In unison, they clapped back the same sequence.

Next it was time to practice transitions by walking single file to the cafeteria. There, each instructor sat with four children in a booth to read a book about counting. One of the groups drew pictures of toys, bunk beds and other things that they could count at home. When this work was done, the children gathered their folders and walked back, single file, to the grass. 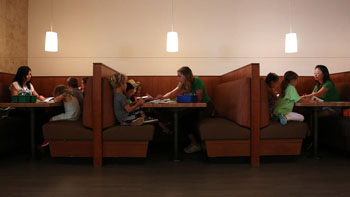 Packing up their things teaches them responsibility, while lining up and walking single file gets kids used to following instructions, Elizabeth said.

At snack time, the children could partake in organic fruit, gummies and aloe water provided by the program, though many brought their own food because of dietary restrictions. Fraley said she’s seen paté.

Even during snack and play time, Elizabeth and the other instructors observed their students and gently pushed them to think more deeply. Fraley said she looks at how many “communication loops” each student is able to complete — how many back-and-forth conversations they have.

“I take what they say and I add a couple more adjectives,” she said.

When one girl volunteered that she was going to San Diego soon, Fraley pointed up and then down as she asked, “Are you going north or south?”

When the kids painted rainbows, she asked Lily, “Have you ever seen a rainbow before?”

What are your thoughts? Cancel reply